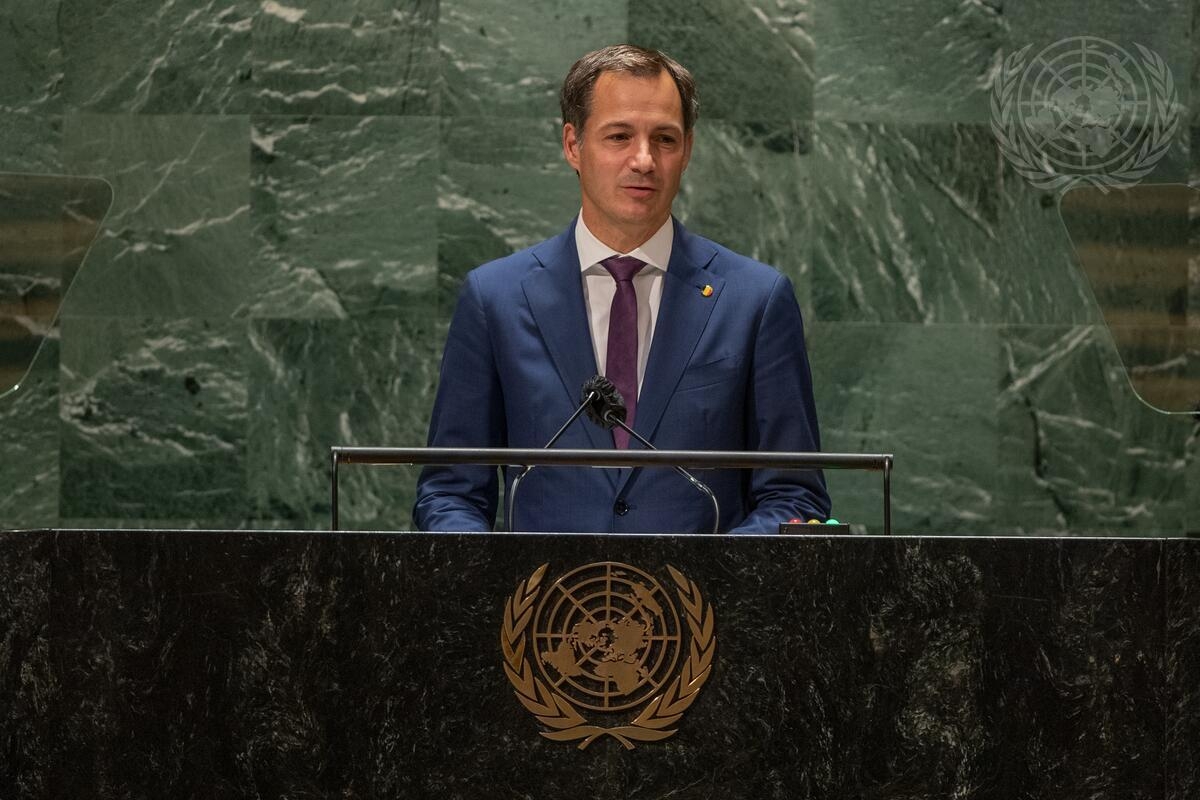 I want to begin with the story of Karina, 22 years old.

Eight years ago, Karina – a teenager – was forced to flee Donetsk, when Russia invaded eastern Ukraine. In spring this year, the family was once again forced to flee. But this time, Karina – now in her early twenties – did not follow her parents. For the first few days, she stayed in touch by phone, but soon things went quiet.

After the Russian barbarians retreated from Bucha, Karina’s horrible fate was revealed. Her body was found, and her stepfather shared with The Kyiv Independent what had happened to her. And I quote:

“There were cuts and lacerations.

There was a piece of flesh torn off from her ribs.

Half of her nails were torn off.

Her leg was shot.

They tortured her and most likely raped her.”

Haunting and horrifying words. And, sadly, only one of thousands of stories that mark that we are living in one of the darkest moments since the birth of this United Nations. Out of the destruction and devastation of the Second World War, the UN emerged “to save succeeding generations from the scourge of war,” as the preamble of the UN Charter begins.

Never again war in Europe. That was the mission. Never again were schools to be bombed on the European continent. Never again were hospitals to be hit. Never again were cities to be cut off from food and medicine. Today, we are witnessing all of these in Ukraine. The mass graves and folter chambers in Izium are the latest signs of the utter brutality of this unnecessary and illegal war – all gross violations of everything the UN stands for.

Faced with this Russian aggression and – indeed – war crimes, the UN is challenged to fulfil its calling.

Everyone in this room, every single country, will be asked one day: What did you do to stop this? What did you do to protect the people of Ukraine? Did you look away, or did you act? In this conflict, there is no room for neutrality.

It was the late Mikhael Gorbachev who said: “The victor is not the one who wins battles in a war, but the one who makes peace.” To win this peace, we must place the principles of the UN Charter at the forefront again. The principles of territorial integrity and national sovereignty. Indeed, if today, the world is less stable and less secure, it is because of the sheer scandal that one of the founding members of this United Nations has trampled on these principles and unleashed a war that reminds us of Europe’s darkest hours.

The statements of the past few days and the threat to launch a nuclear war against an independent country have demonstrated Russia’s ruthlessness once again. It is reminiscent of medieval barbarism, much more than of Russian greatness.

We should be clear: this war will not be without consequences for those who are waging it. There will never be peace without accountability. That’s why Belgium has always supported the International Criminal Court and that’s why we support the ICC to fully investigate and prosecute all serious crimes committed in Ukraine. There is no room for impunity. Not for the butchers of Bucha and not for the leaders in Moscow who are calling the shots and bear the ultimate responsibility.

And I specifically want to highlight the importance of the fight against sexual violence, one of the most destructive weapons of war, punishable under international law. Women who are exposed to acts of sexual violence suffer irreparable damages. And let’s not forget that boys and men too are victims. They all deserve truth, justice and reparation.

Along with this food crisis, the Russian war is also causing a deep energy crisis with global fallout.

People, also in Belgium, have difficulties to pay their bills, small businesses are forced to pause because of spiking energy prices, and workers are losing their jobs.

How should we deal with this?

First, we must continue to support our families and businesses. That is why the Belgian government is releasing unprecedented support plans. After all we’ve done to cope with the impact of the COVID pandemic, once again, we stand ready to protect our people. We are not leaving anyone behind.

But that is only part of the answer. We should also be honest. We live in wartime and governments by themselves will not be able to absorb the full weight of this war. It's a tough message. But it’s the only honest one. We will have to bear the weight of this war together, in solidarity.

Equally important is the action we take. We need to disconnect from unreliable energy suppliers. We must strengthen our energy independence, diversify energy supplies, and transition faster to locally produced green and fossil-free energy. And that’s what we are doing.

Belgium is one of the world leaders in offshore capacity and with other European partners we are investing to transform the North Sea into Europe’s biggest green power plant, quadrupling wind power in the North Sea.

We are building a hydrogen hub in the heart of Europe for the import and transit of green hydrogen, and we are reaching out to partners in Africa and the Middle East to team up. Energy transition is a common challenge that needs common answers, North and South.

And we keep investing in nuclear energy. Safer than today. With less waste than today.

If we want to bolster our energy independence and deliver on the promises of a green and sustainable world, we will need all of these. Belgium brings innovative solutions and expertise to the table with universities and research centers that are world leading, and that will help us to change and to adapt. It is this spirit, this can-do mentality, that we will take to COP27.

Last year, in this room, I spoke about the deadly floods in my country. This year, along with many other countries, Belgium again suffered the effects of climate change and global warming with persistent drought that endangered drinking water and destroyed crops.

War in Europe should not let us look away from the big challenges of our time. First and foremost, climate change. We cannot let one autocrat's warmongering distract us from Our Common Agenda, from the Sustainable Development Goals. An agenda that has not become less relevant, but quite the opposite.

Our generation faces a gigantic task. But I remain confident that with we will succeed.

To destroy progress, you only need one man. That’s what we have learned this year. But to achieve progress, you need many hands. Never before, cooperation – international cooperation – has been so important. Regardless of all the obstacles, of all the pain and struggle, we have today perhaps the greatest opportunity humanity has ever had to create an inclusive community, where every citizen has a say and a stake. Where progress is attainable for all. Let us embrace this opportunity instead of destroying it with bombs and hatred.

This brings me to my final point, a fight close to my heart. The fight for human rights and liberal democracy.

On the eve of the 75th Anniversary of the Universal Declaration for Human Rights, we see human rights under increasing pressure. It is for this very reason that Belgium is running for a seat in the Human Rights Council for 23-25. Our candidacy reflects our commitment to multilateralism and our support for the international order based on the rule of law and on respect for human rights, without distinction.

A stronger focus on human rights is urgently needed. Take for example, women’s rights. After years of steady progress, we are fighting an uphill battle again.

I am sickened to see the fate of women and girls in Afghanistan. What we all feared has become true. Despite all promises, Afghan women and girls have been systematically excluded from public life over the last year. Girls are no longer allowed to go to school. They are forced to get married at an age when children should still be playing with their friends. Their mothers no longer allowed to go to work.

But as one young Afghan woman wrote: “I am heartbroken, but hopeful.” When this woman, whose rights are being crushed, does not give up then we too must keep fighting. For going to school is not a privilege, it is a right. For each and every child, for boys and girls. The Transforming Education Summit was a clear reminder that we must continue to fight for accessibility and quality of education for all.

Just as we must keep fighting for the right of women to equally participate in all domains of decision-making and public life. There will never be sustainable stability, let alone peace, when women are forced to take the back seat.

Not only human rights are under pressure. Democracy itself is targeted. The Russian bombs and missiles directed towards the people of Ukraine are also aimed at causing conflicts in other countries. Just recently, it was exposed that Russia has spent 300 million US dollars to influence foreign officials. To replace their free will by Russia’s will. Their own interests by Russia’s interests. A new form of colonization. In Africa for example, ever more countries are becoming a target and a victim – like in the Sahel or in Central Africa. But also in Europe, where Putin is financing his puppets to carry out his agenda of division, mistrust and unrest. Organizing disinformation campaigns, cyberattacks and illegal interference in free elections.

It should be clear: we will not back down on democratic principles and individual rights. We will not allow Russian trojan horses to undermine our democracies with disinformation and fear. When the fight for democracy is to be fought, we will and we shall stand up.

We must protect the people of Ukraine. We must do everything we can to help Ukraine win this war. And we will.

We will also protect our own people who are struggling to heat their homes and pay their bills. And we will work hand in hand with the Global South.

That is our mission today. For millions of people all over the world, the United Nations remains a beacon of hope – not least for the younger generations. Let us respond to their call and act. People are counting on us. 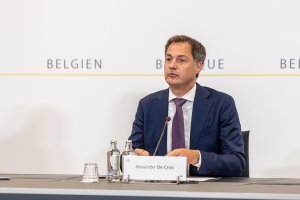 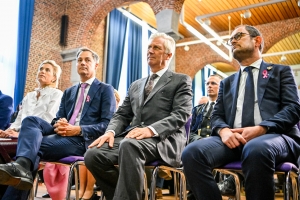