Speech of Prime Minister Alexander De Croo at the press conference on the occasion of the official visit of Angela Merkel, Chancellor of Germany.

The city you have visited most during your tenure as chancellor. Mainly to attend the European Council, but today because of the strong ties between our two countries.

This year it is exactly seventy years ago (1951) that Belgium and Germany, together with the Netherlands, Luxemburg, France and Italy, signed the Paris Treaty and published the Europe Declaration, both cornerstones of what today is the European Union.

Our two countries also enjoy strong economic bonds. Tens of thousands of Belgians and Germans cross our shared border every day. Belgian companies generate about 40,000 jobs in Germany, while German companies represent roughly 85,000 jobs in Belgium. We have nearly 100 billion euros in trade every year.

Figures that reflect that our economies are strongly interwoven. And that we can rely on each other.

But of course, you are here today in the first place to mark an important and pivotal moment: your departure from active politics.

To honour your leadership His Majesty King Filip has awarded you earlier today the highest Belgian honour, the Grand Cordon of the Order of Leopold.

On behalf of all Belgians, and I think on behalf of millions of Europeans and people around the world: thank you for your leadership over the past sixteen years. You simply were amazing.

When you became Chancellor in 2005, Europe looked completely different. Much calmer, much more technocratic, much less of a political battlefield.

But you were not granted a lot of practice time. Almost immediately after you entered the stage, Europe became a hot political arena.

In 2005, there were the French and Dutch referendums.

Then came the Greek crisis, the Ukrainian crisis, the migration crisis and last year the COVID-19 crisis – and I probably forget a couple.

But as you know, ‘crisis’ literally means ‘turning point’, a ‘moment of discernment’.

And thank goodness Europe has been able to count on your ‘gift of discernment’, your ability to make a razor-sharp distinction between what matters and what not.

You always kept your cool.

You've always managed to come up with solutions and at the same time keep everyone together, everyone united.

That is no small feat.

It is often your ‘patience’ and your ‘determination’ that are cited. But it is even more so, in my opinion, your empathy, your talent to put yourself in the position of others and to see the point of view of the counter party.

But there’s more than that.

I would say that there is a certain kinship between our two nations.

Both Germany and Belgium have struggled in the past century with a certain level of discord, at times even battled with deep divisions. Between East and West. Between North and South. And both our countries have learned the hard way that unity is always preferable.

That living together with differences is not always easy, but when we succeed, the satisfaction is all the greater.

We know this as federal nations, in our minds and in our souls. This common experience means that for both our countries, Europe is more than just a geographical reality. For Germany and Belgium, Europe is a mission, a calling. It is the realization that there’s more what unites us than what divides us.

In just a few moments, the Belgian Government is pleased to offer you a concert as a token of our gratitude, friendship and profound respect. And the musical program in BOZAR, the Center for Fine Arts, is the perfect illustration of our unity. Ludwig van Beethoven will be played, A musical genius born in Mechelen, here in Belgium. But Beethoven is of course also an icon of German culture.

But more than Belgian or German, he is the bridge between European classical and European romantic music. He belongs to all Europeans. He gave us the European hymn ‘Alle Menschen wirden Brüder.’

So, our hidden agenda of tonight, dear Angela, was to convince you that Brussels is so much more than Europe’s meeting capital.

We are trying to tempt you to leave Berlin every now and then and -  together with Dr. Sauer -  catch a concert here in Bozar. Or at La Monnaie, our federal opera house that enjoys world fame thanks to the skilful leadership of Gerard Mortier, Bernard Foucroulle and today Peter De Caluwé.

We want you to know that also after your political mandate, you will be welcomed in Belgium with open arms. 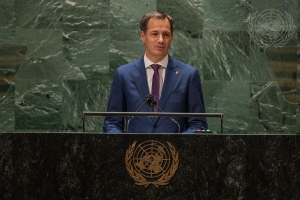 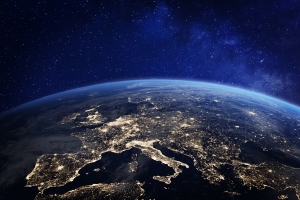