Prime Minister Alexander De Croo said: "Ursula von der Leyen was enthusiastic about the clear pro-European stance of our coalition agreement. We will certainly need this European unity in the difficult months and years ahead. In order to tackle the economic crisis, I worked on the development of a European recovery fund earlier this year, in my capacity as Finance Minister. This fund is up and running now and we have discussed the next steps together. It was reassuring to note that the two key topics - sustainability and digitisation - are also two key elements of our coalition agreement.

Prime Minister De Croo and Commission President Ursula Von der Leyen also discussed the European Commission's role in the current health crisis: "We also talked about a common vaccine strategy: negotiations with the pharmaceutical industry and the distribution of vaccines. But we also discussed the Commission's broader plans for public health, including the creation of a European Biomedical Advanced Research and Development Authority (BARDA) launched by Mrs. Von der Leyen in her State of the Union.

In addition to COVID, the other major topic on the agenda was Brexit.

Prime Minister De Croo: "The clock is ticking, as we are approaching 31 December. Our country has reaffirmed its explicit support for negotiator Michel Barnier. We continue to seek a broad and fair agreement with the British. That means a level playing field in terms of trade - including minimum social standards and state aid rules - the necessary guarantees regarding fisheries and a far-reaching agreement on safety.  Belgium wants to maintain a close relationship with the UK on the basis of the Withdrawal Agreement, consolidating the Good Friday Agreements".

A final point that was also raised at the Benelux talks earlier today was the Commission's initiative on the rule of law:

"Belgium is very pleased with the Rule of Law Reports: this is something that has been talked about for a long time, but which the von der Leyen Commission is now effectively implementing. We also advocate the strongest possible link between European values and European funds. Why should a country be entitled to European money if it deliberately flouts European values', concludes De Croo. 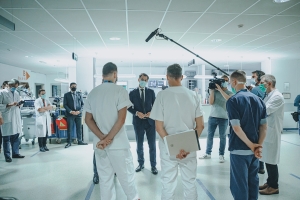