Declaration of the Prime Minister on the Russian invasion in Ukraine

Today we are experiencing one of the darkest moments since the Second World War.

After all the laborious peace-building we saw in the Balkans in the 1990s, we thought that peace in Europe had finally been achieved.

Today nothing could be further from the truth.

A military conflict on European soil, at the borders of the European Union and NATO territory. Unheard of and unprecedented Russian aggression against an innocent Ukraine.

Nothing new for Vladimir Putin.

In recent months and years, many brave Russian citizens have taken to the streets to protest against the Russian president's autocracy and kleptocracy.

They have been brutally beaten, poisoned and murdered.

Today, Putin is expanding his aggression to 45 million Ukrainians.

It makes no difference to him whether they speak Russian or Ukrainian.

What bothers Putin is that Ukrainians are free citizens.

It bothers him that Ukraine is a free country.

A country that makes its own choices.

And yes, a country that looks to the West.

In other words, Putin's attack is an attack on freedom.

Russia's aggression is currently focused solely on Ukraine. There is no indication that Russia is also targeting NATO countries.

But that does not alter the fact that some European countries do indeed feel threatened and have therefore today invoked Article 4 of the NATO Treaty.

Article 4 states that the alliance will consult when countries feel that their territorial integrity, political independence or security is threatened.

The first consultations under Article 4 took place this morning and tomorrow we will consult with the heads of state and government of the 30 NATO countries.

We will take all steps, together with our allies, to increase deterrence and defence. But our actions will always be preventive, proportionate and non-escalating.

In the meantime, here in Belgium we are taking the necessary precautions to provide additional protection for our critical infrastructure.

The time for gradual sanctions is over. If we do not do this, Putin will not stop after he subjugates Ukraine.

We are doing this to weaken Russia's industrial and military complex.

We must cut off Russian banks and state-owned companies from international money markets.

In addition to banks and companies, more members of the political and economic elite should also be added to the sanctions list – from the Russian oligarchs to Putin's club of kleptocrats.

The sanctions should also focus on technology that Russia needs to keep its economy and military running.

Let me be clear: the purpose of these sanctions is not to impact the people of Russia, but rather to step up the pressure on the autocratic regime in the Kremlin.

What is at stake today is nothing less than peace and security in Europe.

Because we – unlike him – do not resort to physical violence.

We do not risk people's lives in unnecessary wars.

Because we reject his law of the jungle and prefer political dialogue to cruise missiles.

This model based on aggression and war is reprehensible.

It is a relic of the past.

It is built on weak foundations.

On a society of distrust and an economy where a small group enriches themselves at the expense of the wider population.

It is a regime based on curtailing freedom and bringing people down.

Our democracy may seem fragile, but it is much more resilient.

Precisely because it is based on free will and voluntary cooperation.

We can only turn this around by forming a tight-knit bloc with our European partners and NATO allies.

We in the West need to hold on tight in the days and months ahead.

And we must use this unity to stop the great injustice being done to Ukraine.

The only way out of this crisis is an immediate cessation of violence.

What is happening today is not just about Ukraine.

It is also about our European security.

A Europe that resolutely opts for the international legal order and a Europe that has learned that in war, there are only losers. 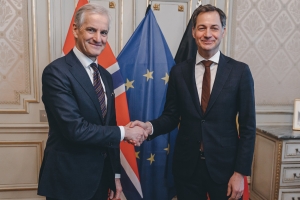 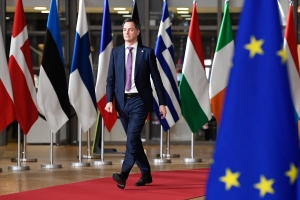